living my life without regrets

He started painting when he was 28 years old.  He died when he was 37 years old…. He painted 900 pictures in his life time.  So let’s say he painted 100 paintings a year, or roughly finished painting a picture every 3rd day…. Wow!  Relentless, very different, almost possessed he was so focused. If you met him face to face you would have found him paranoid, you would not have understood this man… this man Vincent van Gogh.

For years now I have seen his works, I even went to Holland to see his pictures up close, very close… my nose almost touched the paint.

Wow!  It is incomprehensible to me how this pile of colors, this piled up paint, thick and so pressed onto the canvas, makes any sense. When you look at his paintings up close, especially really close, it’s just a pile of colors, which have no relation to each other. The colors don’t go together, you think… but when you step back, when you stare at the whole… Wow!

Vincent was pure genius, albeit a very troubled soul. I often wonder if man has to pay the price of insanity to be a genius. Not just in Art, but in many other aspects of living such as Science, and Life. What made his brain see like that, comprehend like that, explain himself like that?

Toronto had a well published show, a show in 2 segments… one was a drive-in situation where you experience the paintings covering all the walls and floor while you sit inside your car. The venue here was not ideal.

Indentations in the wall produced a line across Van Gogh’s self-portrait and many of his other paintings. A large red fire alarm distracted the viewer in some scenes. It might have been better if we had been facing a different wall but we had to park where we were told.

The other presentation was a walk in… not set up like a traditional museum but more hip in that a display ran via computer, along with piped in music that was like a performance, like a movie, but not really. The two shows were very similar but not exactly the same. Again the images covered all the walls and floor. The transitions from one image to the next in both presentations were very creative. You could sometimes see the paintings come to life before your eyes.

Due to Covid-19 we had some restrictions, there were circles on the floor where you could stand or sit in order to maintain appropriate distancing and masks were required. But all in all it was worth our visit.

Just look at all the stuff below… no, I can’t describe each part… you just have to see it yourself in a city near you if this performance ever gets near you.
Wonderful!
Van Gogh Painted 12 Canvases of Sunflowers

Some of the music was very modern like Luca Longobardi’s music.

Or some classical pieces:

The Picture Grows Before Your Eyes
The next 3 videos should be viewed in sequence as they were all part of a much larger video accompanied by the song "Non, je ne regrette rien" sung by Edith Piaf
1.
2.
3. 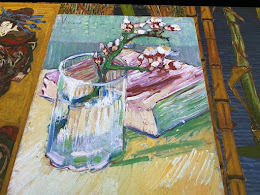 The next 3 videos are all part of a much larger video.
1.
2.
3.
Creation of a Chair
Love the flowers
Video of one of his Starry Night paintings
A Series of Starry Night Paintings
He did many paintings of Irises
The Prison Painting

Watch the candles go out 1 by 1 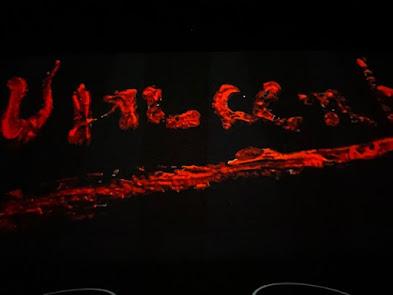 Posted by Hans Muellers at 3:40 PM No comments:

Point Pelee National Park is a worthwhile trip. There is no flamboyance to the park, there is nothing so outstanding that it would change the world, but it’s a great trip if you have the time and the means especially during COVID-19, when you can only visit Nature and admire her glory… All other conventions, mass meetings or rallies have been cancelled in 2020. The only option is to visit nature. At least that is how I look at it.

Carol and I were in isolation starting March 5; we did just the absolute necessary things, like going food shopping; getting gasoline or using the ATM machines and even then took precautions. So for us the trip to Pelee was a big first step in starting our traveling again.

Location is everything, and wow, do they have some nice spots along the shore line of Lake Erie.

What surprised us was the number of commercial hot houses that are all around. I mean huge, commercial spaces. Acres after acres, covered with hot houses, to grow vegetables of all kinds. No longer does this farmer rely on the weather, but he controls the environment inside these hot houses for the best possible production.

I was really shocked to see so many hothouses. Do we, the people, really eat that much produce? Sure there were open fields but there were also lots and lots of hothouses. It is hard to photograph, but here is an example on how large these hothouses are…. And there are hundreds if not thousands of those all around here.

All in all, we had a good trip, a good visit.

I guess we will be traveling more in Canada for a while. Going out of country is not advised, we will heed the advice of the Government. So, don’t look for exotic topics from us on this blog….

Posted by Hans Muellers at 5:46 PM No comments:

See the World from the seat of a Motorcycle.


Not just going to the diner on Sunday mornings, but.... Try to see the World, try to see it as it is, without changing anything. Have a good time riding. Learn as much as you can about other people. Stay free, stay lose and stay healthy. See you on the road. Hans